There is still another aspect of the Operation Bluestar whether this Operation can be sustained on legal grounds, if not, whether those who were interested in their place of worship, had the right to defend it against an attack. 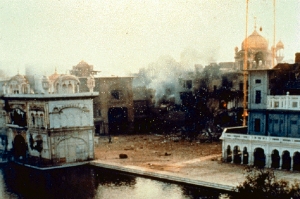 The Armed Forces (Punjab and Chandigarh) Special Powers Act 1983, came into force on 15th of October, 1983. Soon after the Government had surrounded the Golden Temple Complex by the para-military forces. Two to three months before the Operation Bluestar, sporadic exchange of fires between the para-military forces and inmates of the Complex had become a common feature. On the Central Government side it was perhaps decided to send the military inside Golden Temple Complex especially for the purpose of flushing out Sant Bhindranwale and his followers.

(a) If he is of opinion that it is necessary so as to do for the maintenance of the public order, after giving such due warning as he may consider necessary, fire upon or otherwise use force even to the causing of death, against any person who is acting in contravention of any of the order for the time being in force in the disturbed area prohibiting the assembling of five or more persons or the carrying of weapons or things capable of being used as weapons or of fire arms, ammunition or explosive substances.

(b) If he is of opinion that it is necessary so to do, destroy any arms dump, prepared or fortified position or shelter from which armed attacks are made or are likely to be made or are attempted to be made or any structure used as a training camp for armed volunteers or utilised as a hide out by armed gangs or absconders wanted for any offence.

An FIR was later lodged at Amritsar against several persons, including those who died in the operation, for sedition and waging war against the country and many other penal sections. All that is known about the dead amongst the combatants (Sant Bhindranwale's followers) is that except four persons namely Sant Jarnail Singh Bhindranwale, Gen. Subeg Singh. Bhai Amrik Singh and Thara Singh, others about 170 were unidentified terrorists (as mentioned in their post mortem reports.) So the Government has not been able to show if any proclaimed offender or a person wanted in some criminal case was inside the Golden Temple Complex on 3.6.1984.

Seen in this light it cannot be said that those who were inside were acting in contravention of any law or order for the time being in force in the disturbed area prohibiting assembly of five or more persons or carrying of weapons or of things capable of being used as weapons or of fire-arms ammunitions or explosive substances. Whether the fortifications, morchas, weapons and arms being kept by the Sant and his followers, can be covered under the above quoted sub-section (2), shall have to be seen in the Indian Penal Code. Section 442 JPC describes house-trespass:

“442. Whoever commits criminal trespass by entering into or remaining in any building, tent or vessel, used as a human dwelling, or any building used as a place of worship, or as a place for the custody of property, is said to commit house-trespass.”

Obviously, therefore, the criteria as laid down in clause (a) of section 4 of the Act, is missing. The law as contained in the exceptions quoted above, shall come into play. No less than Director General of Punjab Police had observed that there was no criminal inside the Golden Temple complex. Even Mr. Rajiv Gandhi, only a few days before the Operation Blue-Star, had given a clean chit to Sant Bhindranwale, giving him a good character certificate of a religious man. The government has not been able to establish any nexus between the offences committed elsewhere in the Punjab and the Sant and his followers inside the Golden Temple complex. At least, all the murders, dacoities and other offences have now been investigated and fully traced and till now none of the inmates of the complex has been linked with any of these crimes.

Let us examine the ingredients of the clauses one by one. Acting in contravention of any law or order for the time being in force in the disturbed area prohibiting the assembly of five or more persons has not been established. Congregations inside the places of worship certainly do not fall within the prohibition of assembly of five or more persons Carrying of weapons or of things capable of being used as weapons or of fire arms, ammunition or explosive substance, obviously means carrying weapons from one place to another. Inescapable conclusion, therefore, would he that the inmates of the complex had the right to defend it against the attack by the military forces with licit or illicit weapons.

(a) Even if the case is examined in the light of clause (b) above, it is doubtful if any of the criteria in that clause could be available to the government on 3-6-1984.

As I have said above the military forces were out to commit a trespass, therefore criteria too was not available to them. No attacks were being carried out from the complex upon anybody or at least no case as mentioned above was registered against any inmate. We can safely presume that there were no arms dumps prepared or fortified positions or shelter for making attacks or a training camp for armed volunteers or used as a hide out by armed gangs absconders wanted for any offence.

What followed the Operation Bluestar is still worse. Hundreds of innocent persons have been roped in. They have been subjected to torture, experienced only during the war day. They have been interrogated like the prisoners of war, and are still languishing in the military custody. Some of those who have been released are physical wrecks and many had been killed without trial. Even now false encounters are carried out daily by the Punjab Police. Armed forces justify the military custody of such persons under section 6 of the Act, which runs as under :-

This section nowhere envisages a custody in the hands of Armed Forces, rather on the opposite it says that any person arrested shall be made over to the Officer-in-Charge of the nearest police station "with the least possible delay" together with a report of the circumstances.Almost in every case giving reports on the bail applications the police have pleaded that the accused are in the military custody. They interpret this section as having a right for the custody of the accused for unlimited period. "With the least possible delay" cannot by any stretch of law be interpreted as an unlimited period. This perfectly coincides with sub-section (1) and (2) of Art. 22 of the constitution and means that the Armed forces can not retain the custody of the arrested persons for more than period that it required for handing him over to the police.

Hundreds of persons have been arrested and interrogated and 90% of them have been found innocent but still they are not being discharged. Many of them are still in the judicial lock up. Punjab has experienced the blanket means of the provisions of section 107/151 Cr.P.C. Many person are roped in under these provisions and are subjected to heavy sureties which even if given, are send to Revenue Officers for the verifications which take more than a fortnight to complete. Provisions of remand are being misused in most of the cases. People are kept in the police or military custody for full 30 days in some cases, even though there are no reasons for the same. Executive Courts created under the Punjab Criminal Procedure Court, Amendment Act, 1983, are found only too obliging in the regard.