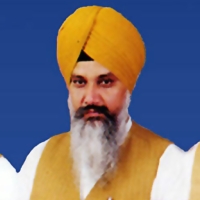 Balwinder Singh Rangila, raagi from Chandigarh, starts spreading the message of love and peace through Gurmat sangeet at the age of seven. Now runs a Gurmat Sangeet Academy in Chandigarh, imparting religious education to more than 2000 students free of cost.

He was always accompanied in kirtan by his younger brothers Bhai Bhupinder Singh and Bhai Surinder Singh. When he was asked by his father to use his talent to spread the message of love and peace through Gurmat sangeet at the age of seven, nothing could have refrained him from doing so, not even 20 years of hardship and poverty which he faced throughout the prime of his life.

Once one of the most sought after keertani (religious singer), Balwinder Singh now runs a Gurmat Sangeet Academy in Sector 40. Fame has eventually come to him and so has money, but it is the pleasure of knowing that he has been able to contribute his bit towards popularizing gurmat sangeet among the young and old is that moves him the most.