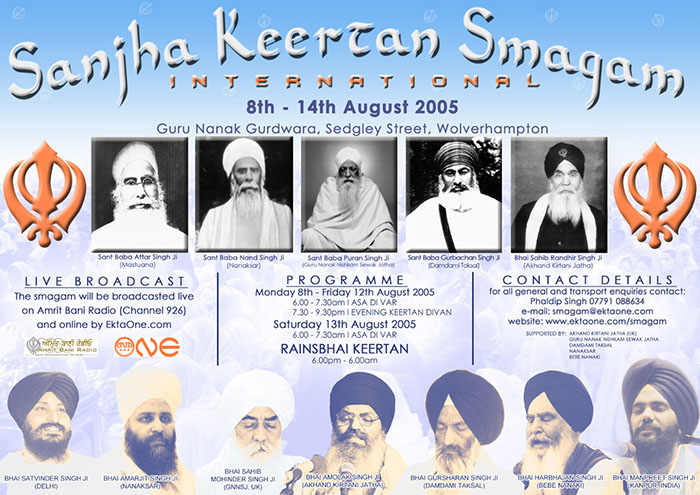 Since the time our Masters, our Gurus walked this earth, great Saints, scholars and visionaries continue to come and inevitably go. Their physical departure often sees the dawn of a new vision, a new light, a new way of thinking, feeling and being. Today, those movements are often seen as “jathas” or “groups”. A collective of like-minded Sikhs who believe in, follow or connect with the vision and soul of these great men and women.

Many see these jathas as divisions within the Panth. I like to see them as different flavors and colors. They may not all agree with one another and have different beliefs, but one thing they all have in common, regardless of anything else, is the truth of one Universal Creator and that is something that unites them all. With followers of Sikh faith growing around the world, jathas have become stronger and more influential than ever before. Unfortunately, over even a short space of time, problems have marred all jathas with many now having branches or divisions within themselves. And it’s not getting better.

In 2005, a small group of Sikhs from Wolverhampton and Birmingham came together to discuss an idea. The idea was not a solution to the issues of gathers and divisions, but it was an idea to bring everyone together - even if only for one event. Every jatha and their most revered jathedhars (leaders) were personally invited to a smagam in Wolverhampton, England for days of Keertan divaans followed by a Rehansbhai Keertan. The event took place at Guru Nanak Sikh Gurdwara in Sedgley Street, which was chosen as it was one of the largest and most neutral Gurdwaras (when it came to jathas) at the time. The smagam brought together collective jathas from Damdami Taksaal, Akhand Keertani Jatha, Nanaksar, Guru Nanak Nishkam Sevak Jatha and Nihangs, sitting together with one another and joining into sing Keertan under one roof, one Gurdwara, one Nishaan Sahib.

It was a memorable and unforgettable experience to have great Gursikhs such as Bhai Mohinder Singh, Bhai Amolak Singh, Bhai Apardeep Singh, Bhai Narinderpal Singh, Bhai Sukhwinder Singh, Bhai Inderjeet Singh, Bibi Balwant Kaur and many more together. There was true love, true oneness of everyone during this smagam and it began a movement of many Sanjha Smagams taking place around the world, all aimed at bring unity to the Panth.

For the first time, SikhRoots who helped organize the event, are releasing videos from the smagam on YouTube for all to listen and watch. Photos are now also being made available on our flickr account. Follow the links below and enjoy some amazing moments from a very memorable smagam.

Items in this compilation